Ricardo "Cardo" S. Borja-Dalisay Sr., or simply known as Cardo Dalisay Sr., is the immortal overarching main protagonist of 2015 longest running action crime drama Philippine television series, FPJ's Ang Probinsyano. He is the twin brother of no longer living Ador Borja De Leon, he serves as a minor protagonist until he was shot & killed by a treacherous policeman Joaquin Tuazon in the fourth episode before Cardo was the main protagonist of entire series.

The twins used to live together in their young days, but due to financial reasons, they were separated from each other. The differences of them is that Cardo is a brave SAF trooper whereas Ador is a noble policeman in (Philippine National Police (PNP). Although Cardo is interested on becoming a PNP cop like Ador. Their lives suffered a big turn when Ador was killed during a human-trafficking operation by a cop traitor named Joaquin Tuazon. later on his career he tackled Various cases. even becomes a traffic enforcer, drag,

He is portrayed by Coco Martin who also played Juan Dela Cruz in the television series of the same name. As teen Cardo played by, Nash Aguas and As young Cardo played by Filipino child actor, Izzy Canillo.

THIS IS GETTING ME UPSET 😩 AT ADDING THIS IS ALL YOUR FAULT KierjayisHENRY'SSON. Lily Ann Cortez NOT (Sixth Archenemy) NOT Jacob Serrano (Second Rival) NOT Renato Hipolito (Current Main Arch-Nemesis) Angelito Valmoria NOT (Seventh Archenemy) and Winston NOT (Lily's Right Hand-Man) (Only Lito!)

Cardo is a well-spirited individual who attempts to protect the society from law breaking corruptions from various types of criminals, such as drug addicts, human-trafficking syndicates, gamblers, dog butchers, and more. He tends to punish villainous criminals by brute force but usually refuses to kill them, only if the rule-breakers stop fighting and surrender.

When he is in extreme trouble, no matter how difficult it is, he is still willing to sacrifice himself to accomplish a particular mission. Especially when a person's life is in risk, he will try to save him or her, even though he or she has sympathetic qualities.

He also cares very much for his family and has shown good interaction with his adopted children, even enrolling them in school to study. Cardo prominently cares for Alyana Arevalo-Dalisay; when she asks for something, he will often accomplish it. The only exception is that does not wish to be home yet until he has avenged his son Ricky Boy's death, by re-joining the SAF.

He leads the Vigilante Group called Vendetta. along with his allies from the Prison, Pulang Araw, General Olegario, His Superior/Grandfather Delfin, his wife Alyana and Now the President of the Philippines Oscar Hidalgo. Which he leads later on after the death of Romulo Dumaguit.

Cardo managed to reunite with his family and avenged with the deaths of Lucas Cabrera, Don Emilio, Brandon Cabrera, Homer Adlawan. After they succeed their mission, with the persuasion of his Grandmother and Oscar, Vendetta and Cardo along with Vendetta surrendered. He's charged with Rebellion, later He along with Vendetta received presidential pardon from Oscar Hidalgo. later he returns back to service as a member of a Special Task force organized by the President. 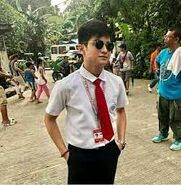 Preceded by: Dominador B. de Leon

Cardo is tan with black hair, has his own team's custom uniform. He gets a blue jacket as his outfit and wears a SAF trooper uniform. He is said to be so handsome and cute (by many women he encountered) throughout the series.

Cardo is a well spirited, but short tempered noble policeman.

He went through a lot of things within his journey. He hasn't done wrong but he was wrongly accused a lot of times.

He is also seen as bloodthirsty and misguided in some occasions. After the arrest of his granduncle Delfin in a framed-up charges, he turned out completely unhappy, devastated, and lost his coolness and patience.

Cardo, in the meeting at the setup of his Twin brother, Ador de leon who later, Joaquin Tuazon shot Him and saves Diego Sahagun to retreats. to gambits His twin, He needs to fakes Himself to meets Carmen De Guzman and Junior De Leon.

Later He meets Glen Corpuz and Onyok about Ador's birthday, but released as a major betrayal through His races. Cardo successfully betrays Carmen and Junior who He'll never meets Him no more! He ends up his injuries.

Carmen goes wild Diego sahagun who He shoots Ador, and Cardo his injuries. as Cardo never forgives Glen for making Him gets mad at Ador, He deeds to hits Benny Dimaapi for His major betrayals.

Carmen was abducted during her son, Junior's field trip by Madame Olga who associates Mr. Tang. The CIDG Boys helps The girls from The drug syndicates, Joaquin shoots Olga and The mysterious (Paloma) Dalisay saves Carmen, but was encountered by Philip during the helps of the Girls. Carmen gets mad Herself for not saving Cardo, and the other girls thanks because of Him.

Later Mr tang and his Deeds hires and sends Jego Sahagun to takes down Cardo, CIDG Boys, Joaquin and His father, Tomas Tuazon. He battles Him that there is no way His deeds will stay away if He never takes down Everyone that they gets in His ways. Suddenly CIDG Boys barges and assaults the Mafia Forces that they stay away from their Deeds. Cardo assaults Diego after being attempted impaled by Tomas, He is shot by Joaquin. Cardo assaults Philip is He is thinking about taking down Him, He later shoots and kills Him in the deaths of the Mafia Forces.

Cardo meets Trina Alonso as His missions, He doesn't want here to understands affects. Like in a Car before Madame Olga passed away by Joaquin, He speaks with Michael V Alonso the Widowed father of Her. Released that Michael V kills His own lover by Accidents, Cardo assaults Him if He ever shoots Her.

Cardo witness the Kidnappers was Ivan Gomez that He affiliates Tomas to gets more moneys. Junior gets abducted by Him, Carmen worries about Her son. She returns Cardo to not attacks, Joaquin spanks Her because of Him. Cardo shot the Old man who joins Dr. Gomez. Glen manages to saves the Children, but She was attempts abducts by Him. Ricardo assaults and physically kills Ivan if He ever abducts Her, He saves Glen for being kidnaps.

His best friend, Onyok's families was revealed about His mother, Rowena and His younger sister Gigi. But His abusive father, Marcelo cares about His deeds. He doesn't care about His own son, Rowena can't let that happens to Her son. Tomas was later killed by Cardo who avenged Carmen, Don Emilo was abducted that Cardo shoots Joaquin.

The only rivalry of Cardo dalisay, was Renato Hipolito the Leader of the Mafia forces who hates Drugs Syndicates.

Romulo redeems a villains to forgives Cardo and became the Vendetta. They shoots Mateo de Silva and His deeds for drugging Everyone.

Lucas Cabrera released to be the Father of Brandon Cabrera and Marco Cabrera, and the lover of Catherine Cabrera. Alyana successfully lies Cardo who she'll never meets No more!!! He retreats the Policemen attempts for abducting Him, Diana Olegario tells Ricardo the truth about Renato Hipolito.

After Cardo's promotional, Dante S. Madarang appears because of His twin brother's death by Ador De Leon before He was shot by Joaquin. Renato Hipolito has been seen by Lily.

Community content is available under CC-BY-SA unless otherwise noted.