Gets Revenges for shooting Ricky by Vendetta and Cardo

Can use a Massive Weapons

Finished by Cardo, Alyana and Vendetta and gets revenges for shooting Ricky

Ended as a revenge of Death for taking down Everyone else

Ricky Boy (His All times Rival)

Destroys Cardo for getting mad, Him (Both Fails)

Homer "Alakdan" Adlawan is One of the Recurring Antagonist from Television Series of FPJ's Ang Probinsyano who is the leader of Kamandag Group and an ally of Renato Hipolito. He is the Taker down of Cardo Dalisay's son Ricky Boy and many other victims, like Alejandro Terante and other innocent victims that are mainly allies of Cardo.

He was portrayed by Jhong Hilario.

He soon joined Pulang Araw, a rebel group fighting for freedom later cooperated with Renato Hipolito in his dirty acts in order to earn money. He faced Cardo multiple times. He was soon killed by Cardo by shooting him in the knees and head dedicating to the victims that he did.

He is seen to be envious, brainist, and money lo-ing man. Homer's brains being greedy and selfish as he was a nature-psychotic alignment.

Peak Human Condition - He has the maximum condition of a normal human.

Peak Human Strength - He has the maximum strength of an ordinary human.

Homer shoots Ricky Boy and understands Cardo Dalisay his tragedy, and grieving his son's grave by the point where he assaults Alyana Arevalo. He steals Bubbles as his lover, and seen this place to use his force for having a baby.

Cardo gets mad Homer, who he shoots Ricky Boy the time where the bombing incident happened at a certain mall. Romulo goes wild out from Homer's greed and later joins with Renato Hipolito as part of the Kamandag Group.

as well Homer adlawan preparing His evil Deeds to abuses Cardo and the former Pulang Araw was now Vendetta. Following of The end of Mateo De Silva, He later joins The congressman Brandon Cabrera to helps His deeds. After releasing the truth that Cardo and Romulo Dumaguit saves Andi and defeats Manolo Catindig that gets His murderous counts with Him, Brandon to replaces Manolo and fights The Vendetta alongside with Homer and Renato.

This second scene Cardo battles and shoots Homer adlawan by his Broken bottle, but severly survives His lifeless Body. Retreating with Kamandag group.

Lucas Cabrera, later disciples Homer about the attempts murders of Virgie Arevalo, The mother of Alyana. Then he vegans His deeds with Renato about Alejandro Terante, as He frames up and betrays Him, He murders Him not the Vendetta.

later Cardo released that Homer is alive and kidnaps Bubbles and Diana Olegario. Knowing the End of Pinuno, The vendetta remembers His memories.

Suddenly, Lily Ann Cortez joins Renato to meets Lucas, Albert Hernandez and Damian. but She was attempted to be abducted by her unnamed assailants, Vendetta saves Her and Defeats all of Them. But it was revealed that Cardo and Brandon meets again, the guy that shoots Adonis Dimaguiba. He later assaults Him that Homer adlawan is alive, The vendetta shoots Him.

Lily speaks with Cardo and Vendetta about Homer, who He kills Alejandro to fakes all of Them. Then lately, Homer assaults Cardo but Jerome Girona Jr. And Bubbles demands Him who He stay away for murdering Innocent people. Homer later quits then tears upon releasing His deeds, Cardo defeats Him, He begs Him to helps the Vendetta and cries to kills Lucas and Renato, but He refuses to forgives Him. Homer Adlawan loses His egos and stays dead by Cardo, Vendetta and Lily Ann Cortez's deeds. He is finished by Cardo Dalisay, as revenge for killing his son and allies. 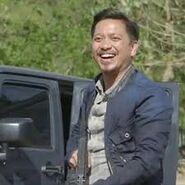 Albert de Vera - Who murdered their wife and his sucessor.