Lito (by Lily, Albert and Cardo)

Angelito C. Valmoria simply known as Lito is the Novenary Antagonist from the Television series direct to videos Shows of FPJ's Ang Probinsyano who is a Former Lover and Childhood of Alyana. He and His Friends and making his debut with his friends in July 6, 2020 Book 4 Season 8.

He is soft on the outside but dark on the inside specially when it comes to Alyana (yandere). He is the hero counterpart of the abusive immortal demigod Cardo Dalisay who was a former Grandson (currently a Grandnephew) of Larry Gadon and is against Cardo's criminal behaviors. Lito is no longer goon of Mafia Forces who resigns and quits to Renato Hipolito and Serrano Jacob to help useless nerds. womens who gonna to cheated to revenge on Albert, Mariano and Renato. He is portrayed by the Filipino actor Richard Gutierre also known as Sandrino Villalobo Imperial from La Luna Sangre on 2017.

Lito met Alyana Arevalo during their childhood, there at Batangas. Living with their simple life as a provincial status, he and Alyana were childhood friends back then where his hometown will soon to be the better infrastructure of goods and negotiations creating his large hacienda, respectively.

At the point of their climax in their backstory, Lito confesses her love to Alyana as she loves back him. The happy moment arises through chasing themselves under the trees, picnicking and helping her out of the efforts he pushes on. However, things bent on their ledges when an opportunity arises for Alyana's father to work at Manila as a reporter. Alyana joins her family, consequently leaving Lito behind, but not before making a vow to return to him once she accomplishes her goals. Lito was reluctant but eventually agreed, holding on to her promise.

As the years gone by, he waited agonizingly until she came back witnessed breaking their promise having Cardo as her husband due to the concern of "kill order" suggestion of Renato Hipolito to Lily Ann Cortez and Arturo Padua in the Presidential Palace putting Cardo and his family a heavy amount of bounty that leaves the family's decision to hid Alyana's cousin hometown and Lito.

Until now, Lito refuses Cardo's replacement of his marital status to Alyana with accords to the legal counsel of the family matters. He tries his best to capture and win Alyana's heart from forgetting their promise when they were young. Also, he vows to get rid of Cardo revealing how good he is in shooting range practiced for how many years.

Lito takes the tour for Cardo and the group and introduce to the sections of his hectare of luxurious remote yards with different aspects of interactions. Meanwhile, his assistant, Antonio, pushes Lito taking care of the business partners while he cuddles with Alyana for the workplace. Antonio wished to lash out him but never did.

Lito now obliged Cardo and the group to have their workplace on buying time of living under the presence of himself, Lito, who got some larger hectares of his owned house backyards from shooting range fields, stables, bowling and billiard sections with golf yards. Alyana was appointed by him as his personal secretary in the business with Bubbles. Not knowing to some, Lito uses Alyana as his secretary but now smoothly eagers to capture and win her heart from the placement of Cardo as her legal husband.

Unknown to Cardo and his folks, he is also running an illegal businesses and he is No Longer allied with Renato Hipolito and Jacob Serrano. Cardo doesn’t have any knowledge about his black-hearted ego.

But after Lito meets the Funeral of Alyana Arevalo and gives a Money to the Task Force Agila where as Serrano goes wild and attacks that Drugs that He gaves, as of He lately retreats. After He was been in the Mafia Rules, Serrano goes wild and challenges Lito that He drugs Him away as of Renato listens to His Nephew's instead of Him. Buwitre dismays Angelita for quitting to Him that He was released to be the Druglord when Serrano tries to kills but He retreats Him as of All, Lito escapes and retreats the Mafia Forces.

Soon, that the Real Drug Queen, Lily Ann Cortez will hires Him with Arturo Padua to avenges Juan. Lito Valmoria lost to tortures Buwitre and Serrano in any slights causing of Dir. Hipolito's Unknown Imprisonment by Policemen and will not be Anymore destroyed.

Angelito's 2nd deeds is to find out what happened to Ramil when He ego washes Both of Him and JP Arevalo to takes down Task Force Agila for torturing Alyana in any slights without permissions. He has to strategies and analysis who ever quits and Betrays Him is to be grounded by the Mafia Forces (when Lito was released to be the Taker Down of Manager Taduran's Families and not knowing He has to possesses Him).

Lito was seen when Ramil's Good Deeds were released to gets rid of Him (against His Families' passed away) and will be brutally upset if He ever lies and betrays Him for telling Task Force Agila the truth (about His Evil Deeds for killing His Families). It is Unknown that will Angelito Valmoria takes down Ramil and JP for resigning to Him, or will He be tortured by Both of Them in any slights for brainwashing Both of Them?????

He seems to be hardworking, inspiring man, and successful person. According to Alyana, she knew him to have a heart and nice to his fellow people during their younger days. Tired of his old life, he then became obsessed in wealth which made him consumed with Hot Headed and Racist. He have also forgotten his nice attitude and turned out to be A Xenophobic He is also seen to be Secretly Bloodthorsty And Wrathful

He is shown to be handsome and fair toned skinned. He is also seen to be averagely tall and muscular man. 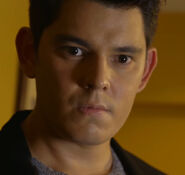 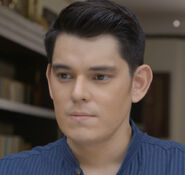 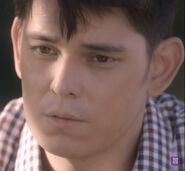